I have long been entertaining the possibility of somehow tying together the three areas: poems, social justice and data visualization. It has been tricky, but here is my first attempt. 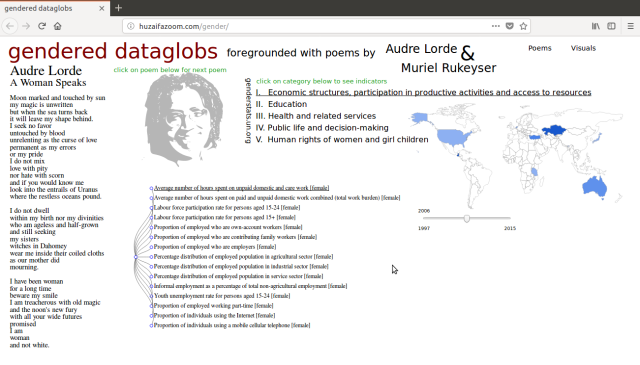 The 10 poems by Audre Lorde and Muriel Rukeyser (wellsprings of poetic sensibility) are intended to provide context for the accompanying data visualization on gender (using data from genderstats.un.org). This is intended in a tangential and somewhat disruptive way. Data for indicators in the development world is mostly presented in a cut and dried way. Add to that their lumping together in neat categories and the bobbing up and down of pretty graphs and charts, and you end up euphemizing the underlying reality. The technical brilliance on display then serves as spectacle. That of course does not take away from the fact that the underlying numbers have been painstakingly collected and systematically organized. And these numbers are pretty much the only authoritative ones that map the reality that social activists use to change the world.

Hence the poems as corrective.